My husband and I had the privilege of attending a lovely wedding in Annapolis this weekend.  It was the marriage of a handsome Marine who is a graduate of the Naval Academy and his bride, who grew up in Annapolis.  Because we had never seen Mount Vernon, we spent an extra day in the D.C. area so that we could spend a day there.  Here is the entrance gate with a beautiful representation of the mansion. 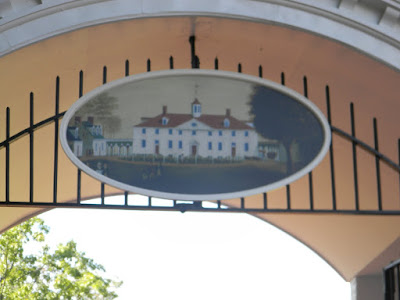 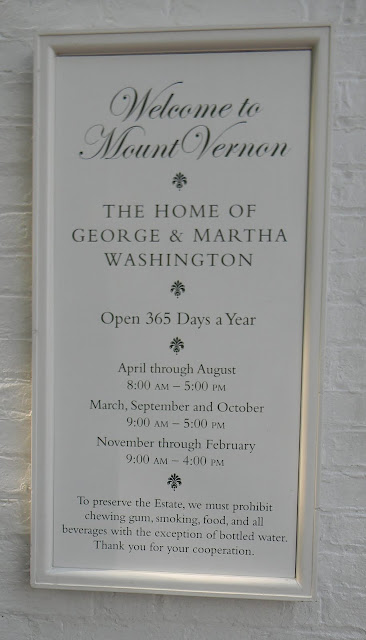 My plan was to photograph the tables in the dining rooms and kitchens and do a post featuring them.  My plans had to change when the guides announced that there was to be NO photography inside of the home.
However, I was sure you'd like a peek at the china selections of the gift shop.  I promise that I did no rearranging of dishes, but just clicked away getting photos with whatever lighting I could get.  Take a look! 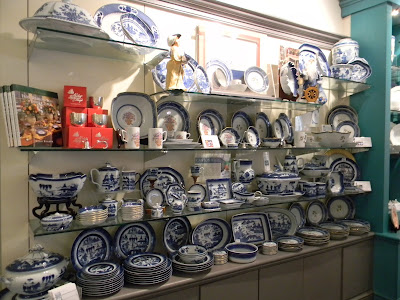 Here is an awesome display of the most well known pattern of the era, blue and white Canton Ware by Mottahedeh. This was used by George Washington and his family as their everyday china.  He placed several orders with his agents to purchase hundreds of pieces of this richly decorated porcelain, known for its traditional hand-painted river scenes and other views of domestic life in China. 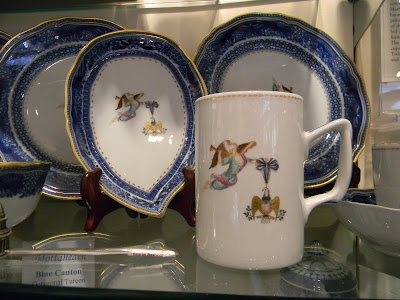 This was Washington's favorite porcelain service, and mine, too.  This features the symbol of the Society of Cincinnati.  Washington was the first president-general of the society, which was comprised of veteran officers of the Revolutionary War. 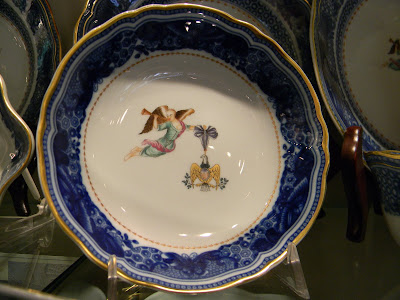 I have coveted this for ages. 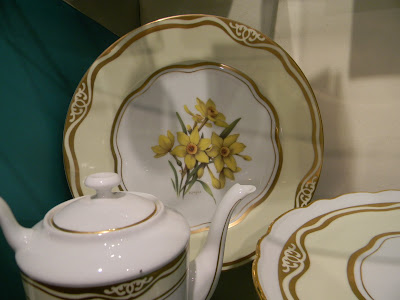 This is Lady Martha Washington pattern.  She was responsible for transforming Mount Vernon into a gracious and accommodating home.  As First Lady, she was hostess to the new nation and set the standard for official entertaining. 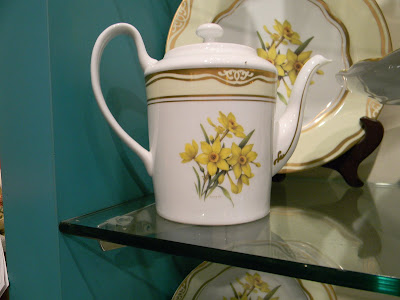 This pattern is an exclusive to Mount Vernon and I have never seen it before.  Isn't it sweet? 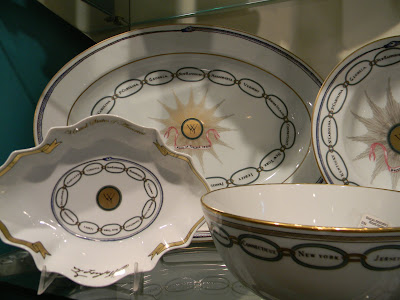 Here's another pattern I was not familiar with.  It's The President's Table.  Each of the links in the chain encircles the name of the first states.  The white, black, and gold is very sophisticated and simple.  Washington's successors have followed his lead in identifying porcelains that represent America and the presidency. 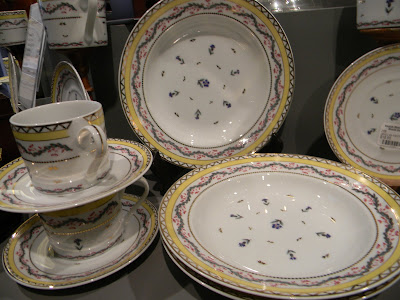 This ribbons and cornflower French porcelain pattern was inspired by a mug used by George and Martha.  The original resides at Mount Vernon and was made in Paris by Christopher Potter, circa 1790-1795.  There are many different pieces offered today. 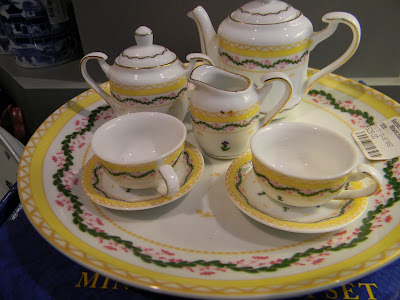 This is a darling little tiny tea set in that pattern. 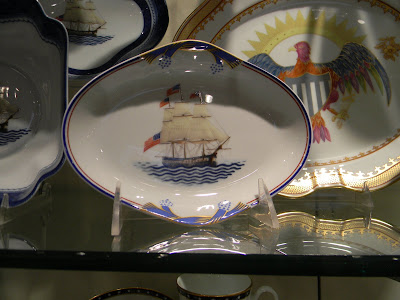 Here are some other patterns that they carry.  The sales of all of them help protect and preserve the Mount Vernon estate and gardens. 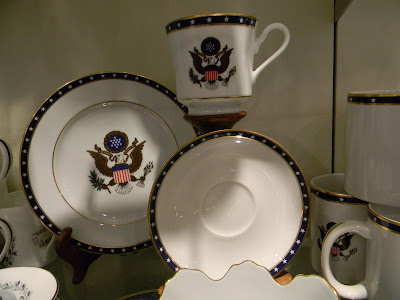 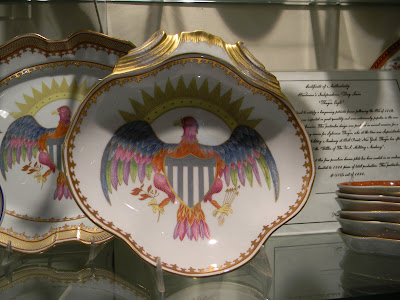 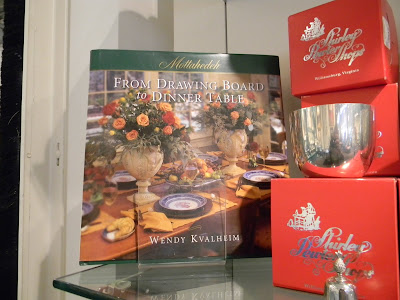 All of the above dishes are made by Mottahedeh and they also offer this beautiful book about all of their wares.  I just couldn't carry this home on the plane due to the darn luggage weight restrictions, but I'm going to Amazon so that I can own this. 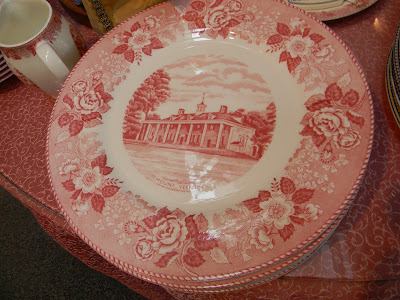 These transferware plates are by Staffordshire.  They come in red or blue. 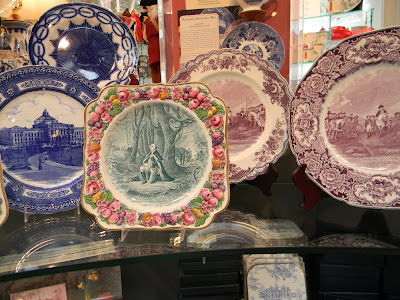 These are antique reproductions and they are so wonderful. 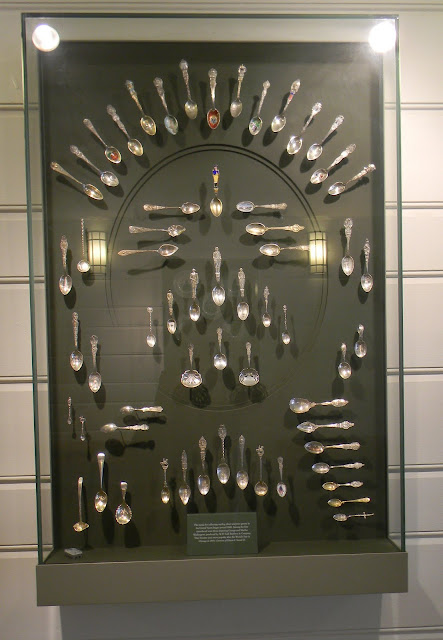 This is a hallway display of silver souvenir spoons. They were so darn beautiful. I couldn't get a photo without the reflection from the lights. 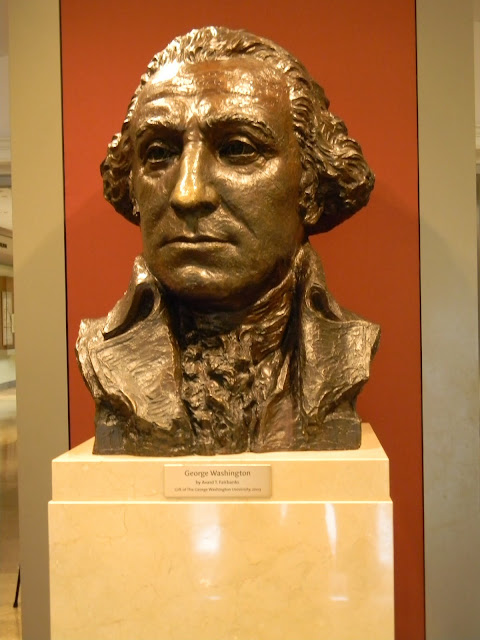 Thank you, George Washington.  You're the Father of Our Country, and the arbiter of such good taste.
Posted by A Toile Tale at 8:58 PM